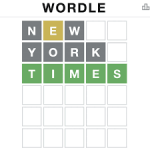 I guess that everyone has heard about Wordle, a free-to-play online word game. Wordle is the simple online game that’s taken the world by storm.

It was launched by Josh Wardle, thea software engineer from Brooklyn, NYC. Wardle made
the game for his wife, who loves spelling bees, crosswords and other puzzle games.]
His wife loved it, and so did Wardle’s extended family.It was then that he decided to release the game to the rest of the world. After making the game for his wife,he sold the game to New York Times on Jan.31. They didn’t reveal the exact price other than “the low-seven figures,” or in other words, more than $1 million.Five months later, millions are playing the game every day.

Wordle is a very simple game to play,but it have several killer features that have lifted it above the competition.These are:

-You can only play one puzzle a day.
-Everyone plays the same puzzle.
-It’s easy to share your game on social media without spoling the answer for others.
To play Worldle you don’t have to download any app, you have just to visit the New York Times Games section.

Each day, there is a mystery five-letter word that you have to guess. You have to guess the word in 6 tries.Each guess must be a valid 5-letter word. You should hit the enter button to submit.
The game helps you guess the right word by turning the letters you chose into different colours. After each guess the color of the tiles will change to show how close your guess was to the word.

Green means the letter you guessed is correct and in the right position.

Yellow means the letter is in the word, but in the wrong spot.

Dark Gray means the letter is not in the word at all.

Some people think that Wordle has got harder since the New York Times takeover ,but it really hasn’t. It is currently free to play and free of ads, just as it initially was.
On Nov. 1, only 90 people had played it. Today, millions play it each day. It has captured the attention of so many people and according to Stacy Costa,a puzzle expert, Wordle is considered a good distraction. Those five or 10 minutes that you’re doing Wordle or any puzzle, you’re not thinking about everything else going on in the world,”
she said. Of course, some people are playing to win, trying to guess a mystery word.